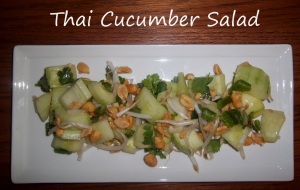 I’ve still got a few more cucumbers coming out of the garden and wanted to make a salad with just a bit of heat, and lots of good flavor. I really didn’t know how great salads could be until a couple of years ago when I started to lose weight and my doctor recommended I eat a salad a day. I thought I’d get bored of them fast, but when I realized all of what you can put into one – I got inspired. I might not eat a salad a day, but I do eat a lot of them. 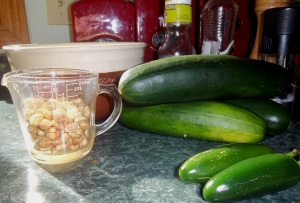 Start with preparing the cucumbers. To easily remove the seeds – slice in half and use a spoon with just a bit of pressure and scoop the seeds out. Slice them up, salt them, and place in a large colander. The salt will help remove some of the excess water and give them a bit more taste.  Let them sit for 10 to 15 minutes.

Place the cucumbers in a large bowl and add the jalapenos, bean sprouts, and cilantro. Next add the sesame oil and rice wine vinegar. Gently toss it all together. For the peanuts, I laid them on a paper towel, folded it in half and used a rolling pin to break them up a bit. Sprinkle the peanuts on top the salad.

Notes – Check your rice vinegar. I’ve seen a couple that contain “barley malt.” For people very sensitive to gluten, it could create an issue. The majority of rice vinegar is fine.